That's all folks!
I have decided to no longer post items on this site and to focus solely on my homily website at www.padregio.com
Thanks for your support...I will leave this site up for awhile to visit links.
# posted by Padre @ Sunday, June 11, 2006

TRAGIC LOSS
Fr. Todd Reitmeyer, (Diocese of Sioux Falls ) (Blogspot): "A Son becomes a Father" died yesterday in a jet ski accident in Texas....Keep him, his family & friends in your prayers.
NEWS STORY HERE
"One person was killed Wednesday in a personal watercraft accident on Lake Travis.One person was killed, another was taken to the hospital after the collision.It happened near Emerald Point at around 1 p.m.A man in his 30's was killed. The driver of the other jet ski, who is also in his 30's, was taken to Brackenridge Hospital with minor injuries.Officers say the two men were operating rented jet skis when they collided."The reporting parties at first said the person was actually in the water and that the jet ski hit him. Whenever we got here, we started to get a little more information and it looks like there were two jet skis actually collided," said Corey Ricketson, Austin/Travis County EMS. It's still unclear whether the man drowned or died due from the trauma of the collision."

New Assignment: Due to a new assignment as full time chaplain at Our Lady of Fatima and St. Joseph's Hospital, beginning shortly, I will take some time out of blogging for a few weeks...check back in a few...God Bless ya all, Padre

PS) Honduras mission was incredible...there is a joy and peace in serving the poorest of the poor!

QUIET TIMES at Not So Quiet Corner...
I am heading to the Honduras to do mission work/retreat with my brother, Fr. Juniper. Be back at a later date.

If you want to help their mission, CLICK HERE 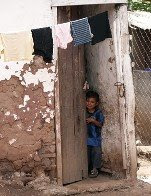 PRAY FOR ONE ANOTHER.

Here's a reason for priests to wear the collar!
"The 73-year-old Archbishop of St Lucia miraculously escaped death on Wednesday night when a man armed with a knife attempted to slash his throat outside the Roman Catholic Cathedral in the capital, Castries....According to the St Lucia Police, the Roman Collar saved the Archbishop’s life."
FULL STORY

Interview w/ Bishop Bruskewitz on defying National Review Board
"Q. On March 30, Mrs. Ewers, who heads the USCCB’s National Review Board, urged your brother bishops to give you some fraternal correction. Do you feel adequately corrected?
A. Sometimes you have to react. If I’m attacked, they are going to get a mouthful of porcupine quills. And it wasn’t just me. They attacked my diocese . . . the people who serve on that board. Some Board members support abortion very strongly, such as Leon Panetta. Paul McHugh, a Kinseyite from Johns Hopkins University, has supported human cloning. This is publicized in some of the USCCB’s own publications like Origins. MORE HERE

# posted by Padre @ Wednesday, April 12, 2006
Spanish Dominican Fr. Angel Aparicio on "Judas" TV program
Guidelines for canonicity:
"They included apostolicity or paternity from the apostles; that the books should be promoted by the big churches and big communities; they should be universally accepted, and they should be consistent with doctrine." MORE HERE

PADRE POINT: Judas is perfect for our 'modern' day...no personal reponsibility, no sin, no free will, all go to Heaven regardless of actions. Man of the Year.

"...Perhaps the most hurtful moment for Nesbella since he was ordained in 2002 came the following year, when he was one of three Altoona-Johnstown priests to receive hate mail from a self-described “priests federation” that demanded an end to “harassment of homosexual clergy.”
“So after I’m ordained, I get this hate mail saying other priests are pro-gay and they don’t want men like me who are traditional,” Nesbella said." FULL STORY

Faithmouse hits another homerun! CHECK OUT the new cartoon, HERE 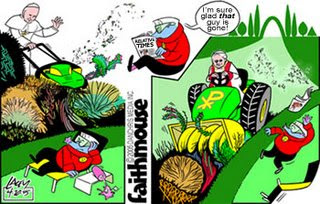 # posted by Padre @ Thursday, April 06, 2006
"I pray that they may be ONE!' (the sad state of 'Catholic' Universities!)
'Monologues' and 'Gay Films' will continue at Notre Dame

Bishop Bruskewitz's response to criticism from the US bishops' National Review Board about his refusal to cooperate with the Board's "audit" of diocesan plans for implementing national guidelines on sex-abuse programs.

PADRE POINT: GOOD FOR BISHOP BRUSKEWITZ...about time someone revealed the hypocrisy of that board! Most are pro abortion, yet they claim to be for the protection of children?

God or the girl? New TV reality show to air April 16th on A & E
"'God or the Girl' follows 28-year-old Joe Adair of Cleveland, Ohio; 21-year-old Dan DeMatte of Columbus, Ohio; 25-year-old Steve Horvath of Lincoln, Neb.; and 24-year-old Mike Lechniak of Scranton, Pa., through the process of trying to figure out whether God is calling them to become priests. All grapple with the sacrifices they'd have to make should they enter the priesthood, including the vow of celibacy the church requires priests to take. And all of them do unusual things, often at the suggestion of their spiritual mentors, that they hope will guide them toward the right path." FULL ARTICLE

116 year old convert!
He was converted to Christianity in 2005 at which ceremony he wedded his last and only surviving wife, aged about 60 years.
“I have never seen a doctor in my life, he said, attributing his longevity to “a simple life”. FULL ARTICLE

Pope Benedict reminds 15 new Cardinals of color red
"May the scarlet that you now wear always express the 'caritas Christi,' inspiring you to a passionate love for Christ, for His Church and for all humanity. You now have an additional motive to seek to rekindle in yourselves those same sentiments that led the incarnate Son of God to pour out His blood in atonement for the sins of the whole world..."